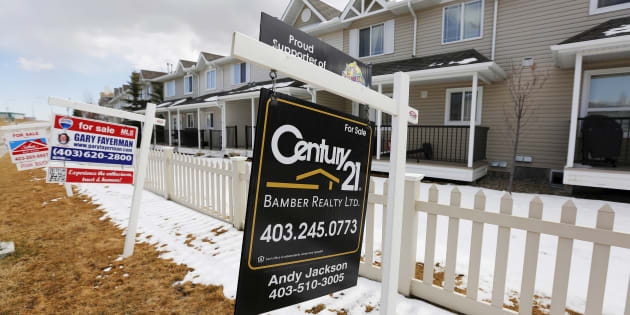 TODD KOROL / REUTERS
For sale signs line along a road where houses are for sale in Calgary, Alberta, April 7, 2015.

After years of boom times, Canada's housing markets are at a turning point. Rising interest rates and tough new mortgage rules have taken some steam out of the market. But job growth is strong and wages are rising steadily, suggesting there will be homebuyers around to keep the market humming.

So which way are things going? That's really anyone's guess. But one thing is clear: After years of — let's face it — unsustainable growth, things in Canada's housing markets are looking a little messy when it comes to things like prices and mortgages.

Below are 10 charts illustrating just how out of whack things have become. Vancouver's housing market is looking especially WTF these days, which is why it gets a bit more attention in these charts than other places.

This chart, which uses data from The Economist magazine, shows the ratio of house prices to incomes in Canada over the past four decades. Never have house prices been so disproportionately high when compared to what people are earning. Only years of rock-bottom interest have made this situation "affordable" for homeowners. Which is why rising interest rates should be — and are — a major concern among Canada's policymakers.

Condo construction is at an all-time high ...

Construction of condos in Canada is at record highs, which for some experts is a warning of falling house prices ahead, though others disagree, given Canada's suddenly accelerating population growth. Meanwhile, single-family home construction is in the dumps, driven in part by a near-total collapse of detached home construction around Toronto. Canadians in the largest cities are moving into condos, whether they like it or not.

... But young families don't want to live in them

There's nothing "average" about buying an average-priced home in Vancouver these days. According to estimates from National Bank Financial, it now requires an income of $238,000 to qualify for a conventional 20-per-cent down mortgage on average Vancouver home. That's not much less than the $246,000 you would have to earn to be in the top one per cent of earners in the city.

Despite the slowdown in the market, prices remain very high, and now rising interest rates and the new mortgage "stress test" have further pushed up the amount of income a household needs to qualify for a mortgage.

... Because Vancouver homes are comically overpriced

This chart from Royal Bank of Canada shows that the cost of home ownership in Vancouver, as a share of income, is the highest ever. For detached homes (the top line), costs are far beyond any previous historical precedent. But condo costs (bottom line) — while elevated compared to historic norms — are not actually outside their normal historic range.

Vancouver used to dominate the lists of world's hottest housing markets like few other cities in recent memory, but those days are history. Global real estate agency Knight Frank's most recent real estate index ranked Vancouver at rock bottom among 43 world cities. How the mighty have fallen.