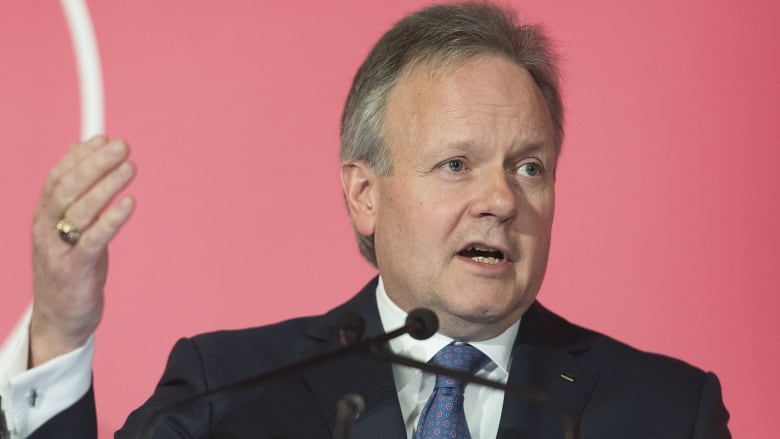 Speaks during a business luncheon in Montreal Thursday, Governor of the Bank of Canada Stephen Poloz said interest rates have been low enough to lift the economy. (Graham Hughes/Canadian Press)

The head of the Bank of Canada says his trend-setting interest rate is low enough, at its below-inflation level of 1.75 per cent, that it's delivering stimulative effects to the economy.

But even in the stronger economy, governor Stephen Poloz said Thursday that the benchmark rate's upward journey to its likely destination range of between 2.5 and 3.5 per cent is "highly uncertain."

The bank's destination range — or neutral range — is an estimate of the preferred level for the interest rate when the economy is operating at full capacity and inflation is within its target zone of one to three per cent.

In prepared remarks of a speech in Montreal, Poloz said the central bank will scrutinize incoming data in order to study how several important uncertainties unfold.

They include, he added, the evolution of the impact of higher interest rates on indebted Canadians, how housing markets adjust to higher borrowing costs and stricter mortgage guidelines, whether business investment picks up its pace and the "highly uncertain" global trade environment.

"Given these uncertainties, we have kept interest rates unchanged at 1.75 per cent since last October," Poloz said in his speech to the Chamber of Commerce of Metropolitan Montreal.

"We will remain decidedly data-dependent as the domestic and international situations evolve." 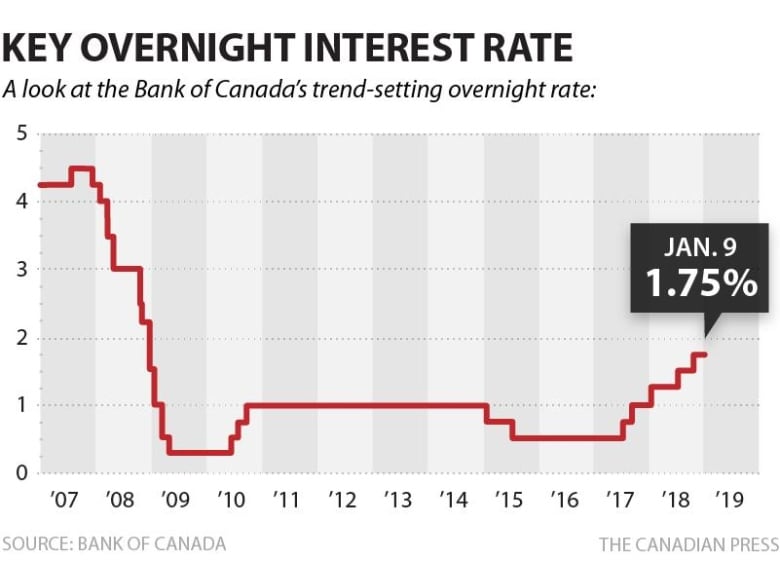 The improved economy has encouraged the bank to raise its key interest rate five times since mid-2017 to keep inflation from creeping up too high — but it hasn't introduced an increase since last October.

"But with that rate still lower than inflation, it is clear that monetary policy continues to deliver stimulus to the economy today," Poloz said.

Next rate news coming in March

The bank's next interest-rate announcement is March 6 — and many market watchers expect Poloz to leave the benchmark untouched until late this year.

The governor's speech Thursday walked the audience through the effectiveness and the limitations of the bank's main policy tool: the key interest rate target.

He shared an example on what would have likely happened if the bank hadn't introduced five quarter-point increases to bring the rate up to 1.75 per cent.

"If we had kept our interest rate at 0.5 per cent from mid-2015 until now, our models tell us that we would have seen stronger economic growth — no surprise there," Poloz said.

"By now, the level of [the growth domestic product] would be about two per cent higher than it is today."

However, he added that while such an increase may sound good, it would have pushed inflation to the top of the bank's inflation range, and likely even higher.

The bank would have then been compelled to raise rates "forcefully" to guide inflation back to its target over the next year or two, Poloz said.

With lower rates over a longer period, he added every Canadian would have likely amassed about $2,000 more in additional debt.

"But the tone of the speech was arguably dovish and could be interpreted as another small, incremental step toward neutral policy."

Three years after touring Victoria’s Customs House mixed-use condominium and retail offering during its interior de-construction, Citified is honoured to be the first media