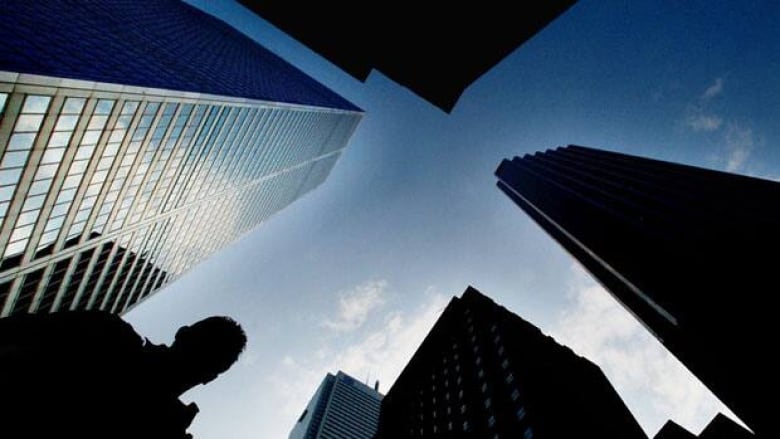 This quarter is usually a strong one for Canadian banks, but a few things are different this year and that is clouding the outlook. (Adrien Veczan/Canadian Press)

Canada's biggest banks are set to report on what has traditionally been the strongest quarter of the year, but market volatility and slower mortgage growth during the period could weigh on their latest results.

North American markets saw a sharp sell-off at the end of 2018 amid a trade skirmish between China and the U.S. and political uncertainty with a partial shutdown south of the border, potentially hampering the banks' related earnings.

"Trading, as ever, is a wildcard but we do expect a sequential decline as well."

During the earnings conference calls to discuss the banks' results for the previous quarter, lenders expressed optimism for the coming financial year, but some said the bumpy stock-market ride could add downward pressure.

"We expect to see some weakness year-over-year in our wealth and wholesale businesses, given the recent market volatility … However, our above-average net sales and strong investment banking pipeline will position us well for growth throughout the year," said RBC's chief financial officer Rod Bolger on a conference call with analysts in late November.

Investors' concerns about the strength of the Big Six banks market-related earnings in the latest quarter are "overstated" given the market rally in January, said Meny Grauman, an analyst with Cormark Securities.

"The reality is that market-related revenues should have actually held up better than most investors' fear, especially in the wealth business where the Canadian banks' fiscal calendar should have helped as the Q1 numbers would have captured a very healthy stock market rally in January," he said in a note to clients.

The financial first quarter has historically been the most robust period for capital markets and trading revenues and "could save the day" for the banks, said John Aiken, an analyst with Barclays in Toronto. Over the past nine years, Canadian banks have seen an uptick in capital markets revenues in the first quarter, up an average of 15 per cent from the previous quarter, he added.

While the macroeconomic environment is becoming increasingly challenging, the banks are expected to continue benefitting from the five central bank interest rate hikes since July 2017, Aiken added in his note to clients.

Those hikes have padded the banks' net interest margins, which is the difference between the money they earn on the loans they make and what they pay out to savers.

"We anticipate NIMs will remain a positive story for much of 2019," Aiken said. "That said, amidst rising rates, the slowdown in household and mortgage credit continues, with annual residential mortgage credit growth of 3.1 per cent in December, marking the slowest rate since May 2001 and roughly half of the growth rate from two years ago."

Residential home sales in Canada in January were the weakest since 2015, down four per cent from the previous year, according to the Canadian Real Estate Association. In December, home sales slipped for the fourth month in a row to cap off the weakest annual sales since 2012.

CREA attributed the drop in December to a rush of buyers at the end of 2017 who moved to lock in home loans before a new stress test for uninsured mortgages took effect on Jan. 1, 2018.

In turn, Canadian banks also saw a surge of mortgage lending during the financial first quarter one year ago — setting a high bar for comparison for quarterly results this year.

Some banks reported increases in mortgage originations of as much as 20 per cent during the first half of fiscal 2018, said Gabriel Dechaine, an analyst with National Bank of Canada Financial Markets.

"'Pull forward' uninsured mortgage originations were surprisingly high … As such, we could see a larger-than-expected slowdown in new originations during H1/19, simply due to the 'tough comps' effect," he said in a note to clients.