The Bank of Canada might not be done hiking just yet

Bank of Canada should 'let the data tell the story': Economist

Investors wagering that the Bank of Canada is ready to throw in the towel on its tightening cycle are setting themselves up for disappointment, say market strategists at some of the country’s biggest banks.

As policy makers around the world pivot toward a more dovish interest-rate outlook, front-end traders are betting Canadian officials are set to follow suit and forgo raising rates again until at least 2020. Yet analysts at firms including TD Securities and Scotiabank disagree, arguing that the BOC’s confidence in Canada’s economy suggests it isn’t ready to shift to a neutral stance just yet.

No one is saying a rate hike is imminent. In fact, most don’t expect officials to resume tightening until well into the second half of the year -- after economic data firm and oil prices stabilize. Yet a more-hawkish-than-expected BOC is still set to push up front-end yields, flattening Canada’s curve and narrowing the gap to similar-maturity U.S. Treasuries, according to Andrew Kelvin, a senior Canada rates strategist at TD.

“Markets have erred too much on the side of a pessimistic outcome, because outside of the energy economy, things in Canada are not quite as dire as markets seem to be pricing,” Kelvin said from Toronto. “There is an inclination to tighten when the data allows the Bank of Canada.”

Participants in the market for Canadian bankers’ acceptance contracts are pricing in just 7 basis points of tightening by year-end, while the odds of a quarter-point hike by the BOC’s Dec. 4 meeting stand at less than 30 per cent, according to overnight index swap pricing. The country’s two-year bonds yield 1.77 per cent, about 72 basis points below similar-maturity Treasuries. 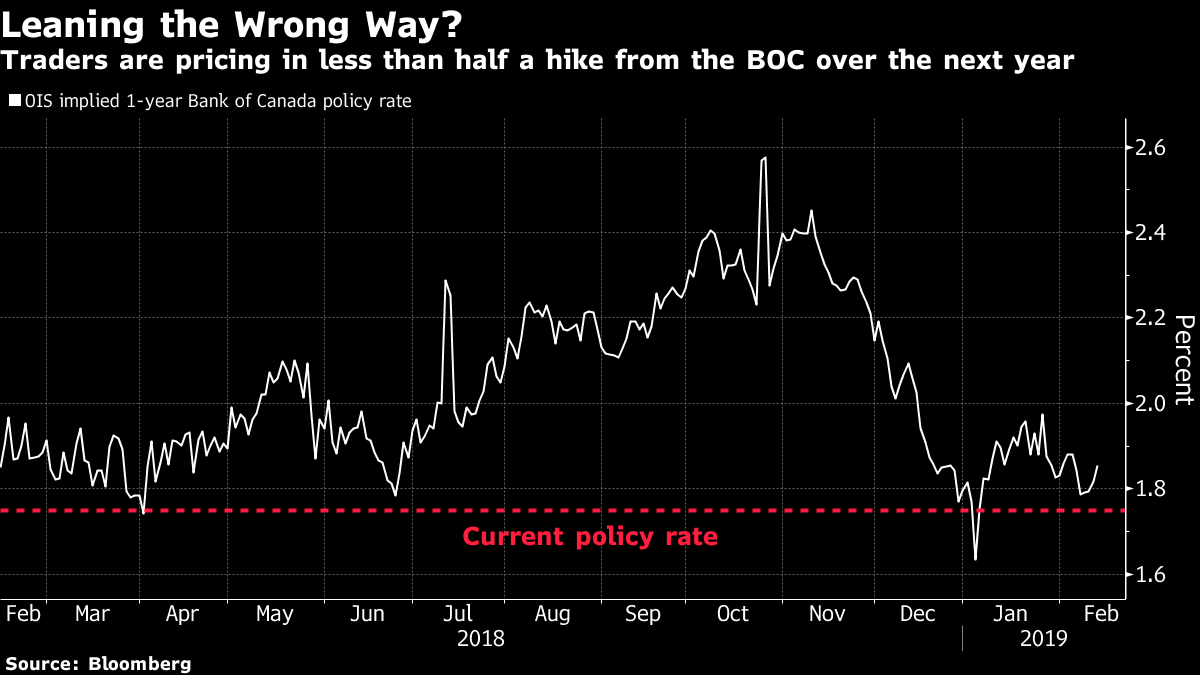 A dovish tilt by the Federal Reserve beginning late last year, and the rising tide of risks that prompted it, have set off a monetary-policy pivot across global central banks. Reserve Bank of Australia Governor Philip Lowe shifted to a neutral stance this month, joining peers from the Bank of England and European Central Bank in acknowledging increasing economic challenges. And the Reserve Bank of India unexpectedly cut rates.

Yet the BOC, which meets next on March 6, has given little evidence it plans to adopt a similar tack. In last month’s monetary policy report, officials made clear they view Canada as currently in the middle of a temporary slowdown that should abate in the coming months.

“The fact that the Bank of Canada is forecasting a return to above-trend growth later this year -- so really viewing the slowdown as temporary -- that still teases up for rate hikes this year, which markets are not currently pricing in,” Laura Cooper, head of FX solutions and strategy at Royal Bank of Canada Wealth Management, said in an interview last week.

That would likely bode well for the Canadian dollar, the top performer versus the U.S. dollar among Group-of-10 currencies in 2019. The loonie has benefited from renewed global risk appetite this year amid a rebound in crude prices on easing U.S.-China trade tensions.

Both TD and Scotiabank expect the BOC to remain on a slightly more hawkish trajectory than the Fed in the coming quarters. Canada’s policy rate will likely top out at 2.25 percent early next year, according to TD, versus 1.75 per cent now.

“The Fed is probably close to being done at this point, but I suspect that the BOC will have a little bit more tightening to do,” said Shaun Osborne, chief FX strategist at Scotiabank. “We generally think the Canadian economy will pick up again.”